I was rooting around in my old family photos the other day and came across this wonderful photo of my Mum, then a teenager and her Mum, my Nan, at their street celebration for V.E day. I knew I had to scrap a copy of this photo and the Ruby Rocket Vintedge was the perfect choice. 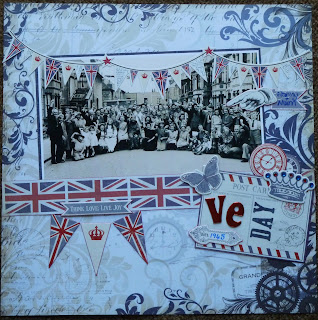 I used the flourish cardstock and the sheet of union jacks to mount my photo ( using the reverse ) and then cut the strip of flags from the paper. All the other embellishments, except the die cut letters, are from the die cut pack. You can buy these all together in the Vintedge collection pack. The flag border was from the borders pack. I also used some of the gems to add some glam to the crown.
Posted by Katrina at 2:22 pm No comments: 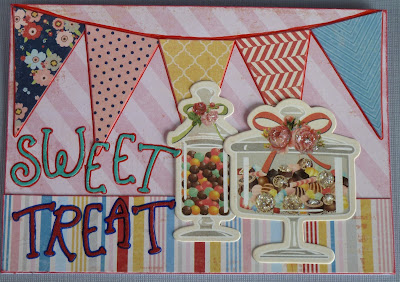 * I covered my card blank with a piece from the Cook House Rules cardstock.
*  I then cut a piece of the stripy border strip from the Miscellenea cardstock and stuck it to the bottom of the card. In the die cut pack you get lots of these lovely flags, so I chose the ones I likes and stuck the to the top part of my card then used a fine tip red pen to add the string and draw around each flag.
* Also in the die cut pack are these cute sweet jars. I added those to the card and
added glitter to highlight the sweets
I then added die cut letters to finish off my card.
Posted by Katrina at 1:46 pm 1 comment:

Hi there, hope you are enjoying the heat! Katrina here, the Fruit Pixie design elf.

I have been playing with the Ruby Rocket cook collection over the past few days. As you have come to expect from Ruby Rocket it is so versatile and has everything you need to make quick and easy projects. 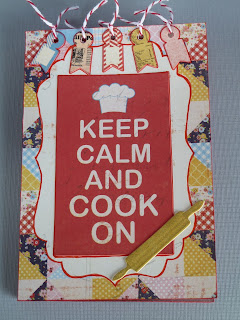 This collection is so well thought out that you don't really need to do a lot to it. For the cover I drew around the frame with a red fine tip pen to make it stand out a bit more, added one of the quotes from the Tokens cardstock and then added one of the fun die cuts from the pack. The little shapes I used as bunting at the top of the cover are also in the die cut pack, after I stuck them down I drew around them with my fine tip red pen, punched holes with a small hole punch and added some bakers twine. 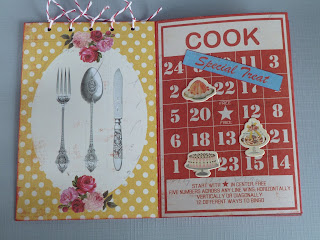 The first couple of pages as you can see are very simple, the small cake shapes are from the borders that come in the die cut pack, I thought they looked cute on the bingo card and then just added one of the word strips from the Tokens cardstock. 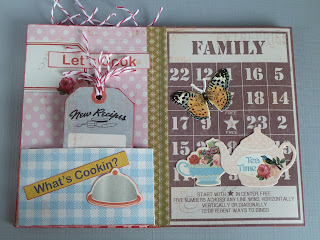 To make the book itself, all I did was cut the Cook 12x12 cardstock Medley in half and then scored and folded the different sections. Of course I had to join the 2 cut sections together to make the book, I didn't want to loose any of the sections so I used some of the IndigoBlu Wishi Wishi tape winegums to join the 2 sections together ( leave a slight gap between the sections so they fold nicely )
At the top of the Tokens12 x12 cardstock is a strip of tags I thought would make another tiny mini book to hide inside, so I made a pocket using some of the Token cardstock and decorated it and the page using a couple of the word strips from the Tokens cardstock and one of the die cuts from the die cut pack.
The teapot, tea cup and butterfly also came from the die cut pack. 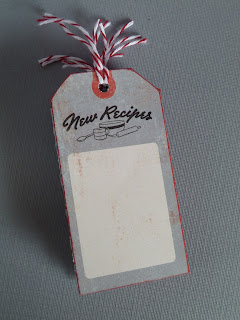 For the mini tag book I simply cut the tag strip off the top of the Miscellenea cardstock, scored and folded it, punched holes in the tops of the tags and added some of the bakers twine. Then added it to the pocket I had made. 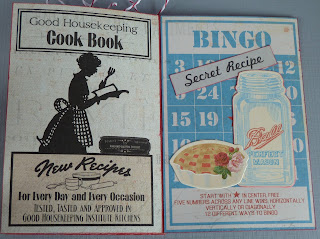 For the last 2 pages I decided to leave the cook book one as it was and then added a couple more of the die cuts from the die cut pack and a word strip from the Tokens cardstock. 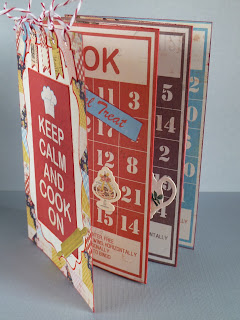 Of course you could add photos to your book, you have the other side which is also printed with individual collages, or I thought it would make a nice gift for someone who had invited you to dinner or for a keen cook instead of a birthday card 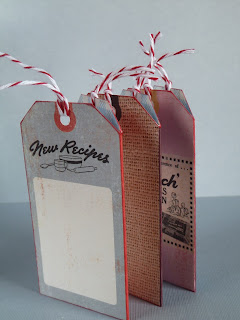 This little tag book would be lovely with family recipes added and given to someone who is off to University or just leaving home or getting married.
What every you decide to do with your book I hope you enjoy the Ruby Rocket cook collection.
Happy Crafting
Love Katrina
Posted by Katrina at 1:28 pm No comments:

Hi there Katrina, design Elf, here again with a couple more projects for you using the China Blue collection

As I have said before the China Blue papers from Ruby Rock remind me of Austria. The range is so versatile, you can make just about anything with it, including scrapbooking. 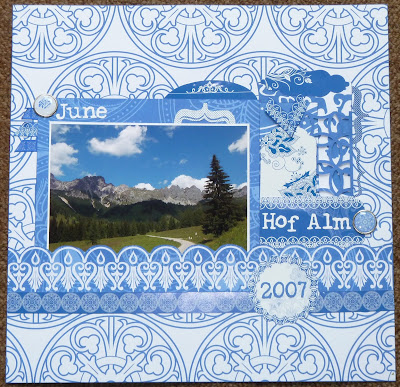 This first one used China Blue Dynasty for the background, the deep border is cut from China Blue Afghan paper and the photo mat was also cut from that paper. I also used stickers from both the sticker sheets and a tag from the tag set as well as one of the beautiful brads and a piece of the ribbon too. The die cut alphabet was the Tim Holtz Typeset. 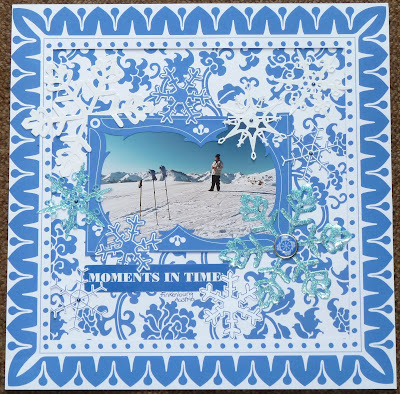 My second layout had to be a snow themed layout. Those who know me well know I have a thing about snow and snowflakes so all the flakes used on the layout are from my collection of  snowflake dies. The background paper for this one is China Blue Blue Arden. I then took the China Blue Temple and cut the boarder away and raised it up on foam tape. I also cut the photo corners from the same paper and attached them to the photo. I cut the large snowflake and a smaller snowflake out of the Stix-2 A4 self adhesive sparkly acetate sheet and then added the Cosmic shimmer polished silk glitter to the sticky side of the acetate. I also kept the backing pieces and used them as well. I cut more snowflakes from some of the left over China Blue Afghan paper and some white card too. I then used a white pen on the blue card snowflakes and a blue pen on the white card ones to add interest. I added the Moments in time sticker from the China Blue sticker sheet and arranged the snowflakes around the photo, added one of the large China Blue brads to the large snowflake and some blue pearls to the centre of the smaller flakes to finish off.
What ever you chose to do I hope you try this range and have fun with it.
Happy Crafting!